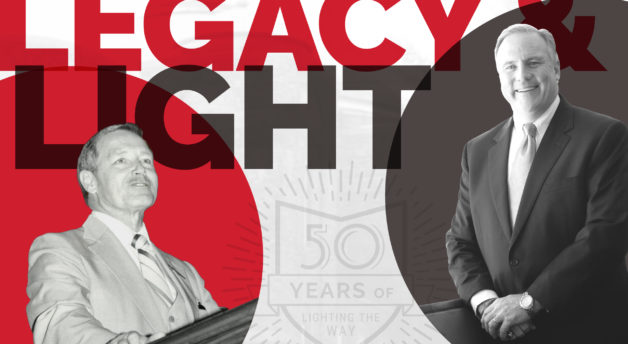 From four campuses (Little Rock, Memphis, Germantown, and Cordova), three focal points (Bible, missions, and evangelism), two presidents (each leading for a quarter of a century), and one preeminent Head (Christ—Colossians 1:18), Mid-America has forged a legacy of faithfulness that promises an ongoing future of lighting the way.

Every decade of the history of Mid-America Baptist Theological Seminary brought change and challenges. The origin of the school in the early 1970s was truly a faith-based start with a handful of students meeting in Olivet Baptist Church in Little Rock, Arkansas. Under the leadership of Dr. Gray Allison, the school not only experienced dynamic enrollment growth, but also the school changed locations almost every decade of its life.

Only three years old, the school relocated from Little Rock, Arkansas, to Memphis, Tennessee, to meet on the property of Bellevue Baptist Church until its new location across the street from Bellevue was ready for use. Although the main campus remained in one place for the 1980s, the school did open a branch campus in Schenectady, New York, to begin theological training nearer to some of the larger cities of the United States. In 1996, the institution relocated to the suburbs of Memphis, inhabiting the former facilities of the Germantown Baptist Church in Germantown, Tennessee. Plans were made for the first housing for seminary students, and the proposed location was to be nearby in Olive Branch, Mississippi.

From a startup school meeting in borrowed classrooms to now an institution with a physical presence in three states was an amazing journey for just over 20 years. The backdrop of all of this was the fact that the school operated on a bare minimum financial foundation that placed maximum pressure on the school’s leaders but also gave maximum glory to the school’s provider, the Lord!

Sometime in late 1996 Dr. Allison had a conviction from the Lord that it was time for him to retire as the founder and President of Mid-America. The first sense that many friends of the school had that he was stepping down came with the announcement that the Trustees had found whom they believed the Lord wanted to next lead the school, Mike Spradlin.

If ignorance is bliss, those were the happiest days of my life and ministry. The challenge of following in the footsteps of a beloved founder and leader is daunting to say the least. One great asset was that Dr. Allison still wanted to be involved in the school. He was already the best boss I had ever had, and he truly mentored me in the first years on the job. Dr. Adrian Rogers, my pastor, always made time for me to ask questions and consult about leadership and decision making, as did his executive pastor, Bob Sorrell. Also, two of the long-time Trustee officers, Mr. Gene Howard and Mr. Roland Maddox, invested greatly in me and helped me learn with lots of on-the-job training. The Seminary faculty, many of whom had been my professors, were incredibly patient and understanding (I had been their favorite student after all). Many others helped as well, and I could never thank them all adequately.

So now the challenge began. How do you lead in a place with such a strong culture even for a school with a relatively brief history? My idea was never to come in and change things but to learn first and foremost. A lot of advice early on went right over my head until I began to figure things out later. When talking with Bob Sorrell about my adjustments to my new role, he told me, “The organization will have a harder time adjusting to you than you will to it.”

One part of my preparation to serve as President had been some very difficult family circumstances with the birth of our daughter. After my wife Lee Ann spent 91 days in the hospital to keep her alive and then a traumatic birth and recovery for both mother and daughter, we had seen the Lord do a deep work in desperate times.
With the construction of Mid-America Housing looming right away, I was told that we were $1 million short of our goal to begin construction and that we needed to decide to delay that start if we could not get the money. Prayer, prayer, prayer! And then the next week a wonderful friend of the school sent a check for $1 million, and we were able to start on time. The story of Mid-America is more than the Lord providing for financial crises like this, but these moments illustrate what our mighty God can do when He gets the glory, and it is His will!

Changes were happening in our beloved Southern Baptist Convention as the denominationally-owned seminaries were hiring strong inerrantists as their new presidents, and those presidents were reshaping the theological makeup of their institutions. Another change was the establishment of college programs by the SBC seminaries. These changes were just a prelude to the tsunami of online learning and distance education which was to come.

Though never a part of our strategic plan, the Lord had a plan to move the school yet again. A neighboring medical facility approached us, and we eventually sold our Germantown Campus and were invited to move next door to our great friends at Bellevue Baptist Church, now located on the eastern side of Memphis. Our new campus and relocated student housing constitute a wonderful 51-acre site to train pastors and missionaries to win the world for Christ. The new facilities and equipment greatly aided in our expansion to online learning as an extension of our reach in theological training.

The second decade of the 2000s saw the expansion of our limited undergraduate programming with the beginning of The College at Mid-America in 2017. Although traditional extension campuses are not as common, we now have two campuses that meet inside prisons offering fully accredited degrees. One campus is in Arkansas and the other is in Colorado, and we have wonderful faculty who live nearby each campus to oversee our work there.

Each Tuesday we still gather for Chapel as we have for 50 years, and the call goes out to the students, “Who has a witnessing testimony to share today?” The testimonies are such an encouragement. I remember when some of their parents were here and sharing in Chapel, giving glory to God for souls being saved. Now, their children, their legacy, talk about how God used them and someone accepted Christ as Savior.

Until the Lord comes again our work is not done. Lost people need Jesus, churches need pastors, and the world needs missionaries. To all the world for Jesus’ sake.