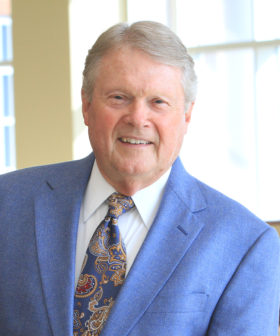 Dr. Whitmire, who grew up in and around Atlanta, GA, serves as Instructor in Music and Worship at Mid-America. He trusted Jesus as his Lord and Savior at the age of 15, while teaching in a Vacation Bible School in Piketon OH. At that same time, he surrendered his life to full time Christian service and began to lead worship as opportunities arose. While earning a BA degree in Music from Stetson University, Deland, FL, he married Linda Dooley of Rockledge, FL. He went on to attend Southwestern Baptist Theological Seminary in Fort Worth, TX. In 1999 he was awarded an Honorary Doctor of Music degree from Liberty University, Lynchburg, VA because of the body of his life’s work.

Under Dr. Whitmire’s leadership, his Children’s, Youth, Handbell, and Adult choirs have toured and sung in 38 states and Disney World, Brazil, Canada, England, France, Germany, Israel, Jamaica, Romania, Spain, Switzerland and Uruguay. His Youth and Adult Choirs have sung in eight Southern Baptist Conventions, and he directed the music for four of those.

Dr. Whimire’s wife Linda ministers to women by sharing her considerable experience serving as a minister’s wife. She faithfully models what it means to serve as a mother at home (Titus 2:4-5), raising six children (three boys: Wade, Joshua and Luke, and three girls: Kelly, Wendy, Shannon), 10 grandchildren, and two great-grandchildren. Mrs. Whitmire has sung solos and taught Children’s Choir for years, and continues to sing in the Adult Choir and in other productions.