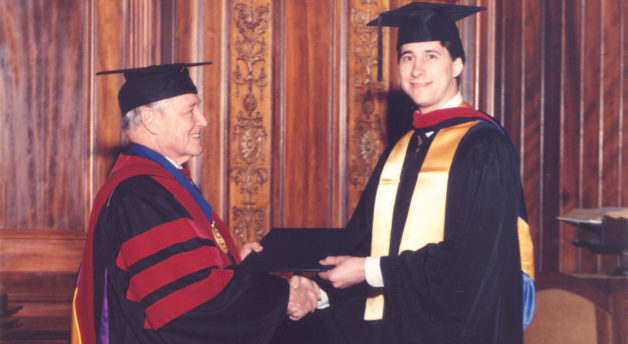 When God called me into ministry, I was seven years into my “secular” career. I desperately needed training, so I began searching for a seminary. I knew nothing. I asked the pastor of my hometown church, Hershael York, where I should go. The year was 1991, and he said if you want conservative theology and an emphasis on missions and evangelism, there’s only one game in town: Mid-America Baptist Theological Seminary. He was already an MABTS alumnus (MDIV, 1988) and was working on his PhD at Mid-America. I didn’t know enough to know what liberal theology was, but it sounded bad, and I trusted and admired Hershael, so we sold the house in Alabama, packed up, and moved to Memphis.

When I got to Mid-America, I quickly discovered I knew even less than I thought. I hadn’t attended Bible college nor had any theological training other than what I learned in church. My undergrad degree came from a state university, and when God called me, I was focused solely on my career. But I discovered that at Mid-America, I wasn’t alone. I was surrounded by many men in the same boat, who had been well into a career and were going back to school to pursue training for ministry. I immediately felt a sense of family within this new community.

One of my new friends, Clayton Cloer, had a nearly identical story, leaving a promising business career to become equipped to pastor. (He’s now Senior Pastor at the Church at the Cross, Ocoee, Florida.) I had no idea what God would do with me after seminary. As it turns out, God didn’t lead me into a preaching ministry but used my background in the ad agency world to start a communications ministry. My very first client? Friend and fellow alumnus Dr. Clayton Cloer and his church in Florida.

That’s what sets Mid-America apart. You see, in the 1990s, you paid a little bit of a price to go to Mid-America. The school was different and still is. It’s all the best of what Southern Baptists stand for, but it’s not beholden to anyone but Christ. It was founded by men who never stopped believing in the Bible—even during the liberal-leaning 1960s and 1970s. It was conservative before conservative was cool. And even as late as the early 1990s, that made us mavericks. Mid-America Mavericks. It also bonded us. Branded us. Once you went to Mid-America, it became part of your brand. And you became part of its family.

Today, when you tell someone you graduated from Mid-America, they know exactly where you stand. You represent the Bible. Missions. Evangelism. And when you meet a fellow alumnus, you know you’ve met a brother or sister. They get you, and you get them. It matters not whether you graduated shortly after the school began in the 70s, or in the mid-90s like I did, or are part of the Class of ’21, you’re a Mid-American. And that makes you Mid-America for life, part of a forever family of friends.

Today, more than a quarter century after walking across that stage at the downtown campus and being handed my diploma by Mid-America founder Dr. B. Gray Allison (see photo), I still share friendships that began at MABTS. Our relationships were cemented by discussing theology at lunch tables in the Mid-America cafeteria, or cultivating our devotional life in a professor’s office during his after-class discipleship group, or winning the lost at a Memphis housing project doing practical missions. Those were the down-in-the-trenches moments that forged forever friendships. They turned classmates into family members, the kind of friends that you can run into at the Southern Baptist Convention 25 years later and pick right back up where you left off. Once Mid-America, always Mid-America.

To this day, if I was struggling with a spiritual problem or wrestling with a thorny theological issue, the first person I would phone is a Mid-America alum. I know I can trust the advice of a fellow Mid-American, just like I trusted that seminary referral 30 years ago.

If you’re a Mid-America alumnus, I know you understand the kind of bond I’m talking about. I encourage you to keep these connections strong. Support one another with encouragement and prayer. And support our alma mater with prayer and financial support.

If you’re looking for a seminary or college, I encourage you to become part of the Mid-America family. It’s more than a world-class theological education. It comes with a free lifetime membership to the forever family of friends that is the Mid-America community.

?
Are you a Mid-America Alumnus or Alumna?

Visit our Alumni web page and tell us what’s new with you!