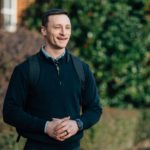 Share
Three weeks after Chris Noe’s car was stolen, he wanted to find the guy who stole it. Not to get the car back; God had already provided another car. Not because Noe was angry, even though he admitted it would be easy to be angry. Noe wanted to forgive him. “I want to find that guy and say, ‘I love you, and Jesus loves you,’” Noe said. “I want him to experience something like that.” Mid-America Seminary student Noe sought to forgive because he understands the mindset and lostness that can lead to stealing a stranger’s car. “I’ve been on the other side,” Noe said. “I saw the world as only struggle and no love. I thought, ‘I’m either going to jail, or I’m going to die. So I might as well live and get pleasure out of this life.’” At age 12, he began smoking cigarettes and marijuana. At 15, he began selling weed and went to jail. By the time Noe was 17, he had served a year-long prison sentence. He progressed to abusing pills, cocaine, and heroin. It felt like the drugs had hooks in him that only sank deeper whenever he tried to get away. Eventually, Noe overdosed and found himself again in a detox facility. The drugs he smuggled in soon ran out. He believed nobody wanted him, and the world would be better off without him. In that desperate moment, Noe prayed, “God, if You’re real, if You are Who You say You are, then I’ll give You my life. If You can do something with my life, You can have it.” Less than 30 minutes later, Noe felt something change. Joy had entered the community TV room. Or more specifically, Mid-America professors Dr. Steve Wilkes and Dr. Steve Miller had entered the room. Dr. Wilkes and Dr. Miller shared the Gospel at that facility every Wednesday. For them, it was an opportunity to practically live out what they believed and taught. Normally, Dr. Wilkes would share his testimony of battling depression, Dr. Miller would lead a Bible study, and then Dr. Wilkes would lead the group in an opportunity to accept Christ. WHEN NOE HEARD THIS GOSPEL PRESENTATION, he did not care who saw him or what they thought. He stood up and got saved. He realized that Someone did want him—God. The Creator of the universe wanted him, and that changed everything. Afterward, Noe had a conversation with Dr. Wilkes and Dr. Miller and received a card with their names on it. Soon, he misplaced the card and no longer knew who they were or where to find them. Noe thought he would never see them again. Over the next few years, Noe’s salvation transformed his life. He got clean from drugs, matured in his faith, and felt called to attend Mid-America Baptist Theological Seminary. When Noe went to the school’s website, he immediately saw and recognized Dr. Wilkes but was saddened to see he had passed away. Noe discovered, however, that Dr. Miller was still a professor at Mid-America. Armed with this knowledge, Noe arrived at orientation with one thing on his mind: find Dr. Miller. Towards the end of the day, Noe saw Dr. Miller, introduced himself, and said, “I know you don’t know who I am, but you shared the Gospel with me when I was in a detox facility. Now, I follow Jesus, and I just wanted to say thank you.” To Dr. Miller, meeting Noe again and hearing his story served as examples of God’s power and the fruitfulness of faithful, consistent evangelism. SOON AFTER THEIR REUNION, Dr. Miller became one of Noe’s first teachers at Mid-America, and together they evangelized at the detox facility a few times. Dr. Miller remains an Associate Dean, Department Chairman, and Professor at Mid-America where Noe is completing an Associate of Divinity. Here, they both continue combining academic understanding with practical application in order to see more lives changed by Christ
Give a gift today